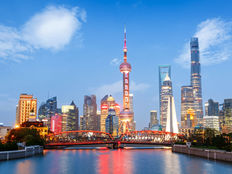 With the MSCI China Index lower by 4.66% over the past week, investors can be forgiven if they’re currently ignoring stocks in the world’s second-largest economy amid the coronavirus backdrop, but some China consumer ideas merit consideration.

For example, the Global X MSCI China Consumer Discretionary ETF (CHIQ B-) has been slightly les bad than MSCI China Index in recent days and some analysts are pointing to Chinese consumer stocks as beneficiaries of not victims to the COVID-19 outbreak.

“Many malls and stores remain shut and sales of cars and smartphones are crumbling, but demand for health, entertainment and cosmetics products is buoyant, according to data from e-commerce giant Alibaba Group,” reports Reuters.

Other data points indicate Chinese consumers are making purchases of items that can be used at home due to strict travel controls in the country implemented due to COVID-19.

“Sales of yoga mats and rowing machines have also soared, up 250% during a two-week period in February from a year earlier, it said, while sales of books jumped 60% on Alibaba’s Tmall marketplace in the week beginning Feb. 10 compared with the previous week,” reports Reuters.

“Other Chinese e-commerce sites also had some non-traditional goods among their best-seller rankings. Pinduoduo (PDD.O) noted that haircutting kits and condoms were among its most ten most popular items, while JD.com (JD.O) said sales of baking and roasting equipment had risen 7 times,” reports Reuters.