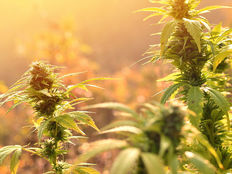 Cannabis equities remain favored destinations for short-sellers, but that leaves open the possibility of a short-covering rally that could lift those stocks and ETFs such as the Global X Cannabis ETF (POTX).

POTX and other marijuana ETFs have been struggling to this point in 2020, but last week, the Global X fund gained about 3%.

Canopy Growth (CGC) is the third-largest holding in POTX at 8.18% of the ETF’s weight. GW Pharma (GWPH) and Cronos Group (CRON) combine for almost 18% of the fund’s weight and are also among the most shorted cannabis stocks.

Data from S3 confirm that short interest in the most heavily shorted cannabis names, including plenty of POTX holdings is actually on the rise.

“Shares shorted in the top 20 shorts in the sector increased by 47 million shares in 2020, worth an additional $201 million of short interest,” according to the research firm. “But in February, while short sellers sold a net 24 million shares, short interest decreased by -$7 million as shorts bought to cover shares with higher stock prices than they sold short.”

The legalized cannabis industry is also a nascent business with huge opportunities. New Frontier Data estimated that the consumer market value was nearly $344 billion in 2018, with Asia making up over half of that. There were also 263 million cannabis users globally over the past year. Interestingly, cannabis shorts have given back some 2019 gains this year.