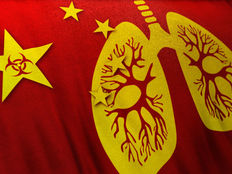 China’s market and country-related ETFs were among the hardest hit on Tuesday after a new coronavirus, or the “Wuhan pneumonia”, killed six and fueled fears of a larger outbreak that could disrupt the economy.

A leading Chinese health official warned that a newly identified virus has spread between humans, fueling concerns the disease could be transmitted as millions of Chinese travel for the annual Lunar New Year holiday, the Wall Street Journal reports.

A similar coronavirus outbreak of severe acute respiratory syndrome, or SARS, also upended Asian markets and economies in late 2002 after it killed 774 people.

“The economic consequences could be extremely concerning,” Rajiv Biswas, chief economist for the Asia-Pacific region at IHS Markit, told the WSJ. “China’s international tourism has boomed, so the risks of a global SARS-like virus epidemic spreading globally have become even more severe.”

Not as bad as the SARS epidemic

Some observers, though, argued that things may be not as bad as the SARS epidemic this time around since the so-called Wuhan pneumonia seems to be less fatal and less virulent than the SARS strain, Forbes reports.

Furthermore, Beijing has acted swiftly to contain the virus. Consequently, TS Lombard economist Rory Green argued that the negative effect on the Chinese economy could be “almost certainly” less than SARS, adding that the market declines may be an overreaction.

Marketfield Asset Management’s Michael Shaoul also believed that the selling may be short lived even if the outbreak rises to that of SARS levels, since accommodative monetary and fiscal policies will continue to drive the economy. Specifically, Chinese stimulus measures are only beginning to trickle through the economy and the phase-one trade deal has helped mitigate some of the uncertainty.