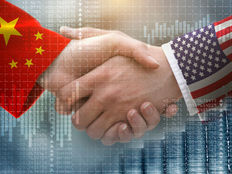 CHIK tries to reflect the performance of the large- and mid-capitalization segments of the MSCI China Index that are classified in the Information Technology Sector as per the Global Industry Classification System. CHIQ’s underlying index “incorporates all eligible securities as per MSCI’s Global Investable Market Index Methodology, including China A, B, and H shares, Red chips, P chips, and foreign listings, among others,” according to Global X.

“Morgan Stanley has flagged 29 Chinese stocks that are most likely to benefit from the completion of a phase one deal between the U.S. and China,” reports CNBC. “Nearly half of them are from the information technology sector, which has been hit by the trade war as those companies have been on tariff lists. Eight are from the consumer sector.”

The technology race between the U.S. and China can be linked directly to the amount of business investment that each nation receives. The U.S., at one point, stood head and shoulders above its rival, but that gap is now narrowing, which would make way for gains in China-focused technology ETFs.

“China’s import growth has stalled this year amid the broader slowdown in the economy, helping to widen the trade surplus,” according to Bloomberg. “As part of the phase one trade deal agreed with the U.S. this month, the nation has committed to ramping up purchases from there by as much as $200 billion over the next two years.”

Adding to the case for CHIQ, China has been looking to increase internal consumption to reduce the economy’s sensitivity to exports, and those efforts appear to be paying dividends. While some data points indicate the Chinese economy and consumer spending are slowing, policymakers remain proactive.

“We believe IT/Internet-related and Transportation stocks will benefit the most from any de-escalation of trade tensions – IT and Internet due to their exposure to tariff impacts and technology bans, while Transportation stocks, especially Airlines, should benefit from an improved global trade outlook and strengthened CNY/USD,” according to Morgan Stanley.