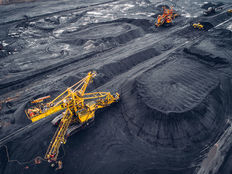 The ALPS Clean Energy ETF (ACES) is one exchange traded fund at the right place at the right time and not just because it is up more than 30% this year.

“US power generation from coal totaled 60.1 TWh in April, down 23.4% from March and 18.1% lower than the year-ago month,” S&P Global Platts reports,” citing the Energy Information Administration. “The figure was the lowest month in over 47 years, including below the previous record of 62.87 TWh generated from coal in April 1974.”

More data points confirm coal’s tailspin and the benefit that brings to ACES.

While coal use among U.S. utilities slides, data confirm renewables are replacing coal.

“Renewable’s power generation share was at 23.2%, up from 18.8% in March and 22.1% a year ago,” according to S&P Global. “It was the first time ever that power generation from renewables were higher than coal in a month. Wind generation was at a record-high 30.22 TWh in April, up 16.1% month on month and 12.9% higher than a year ago. April is typically the windiest month of the year, with an average of 23.34 TWh generated in April since 2014.”