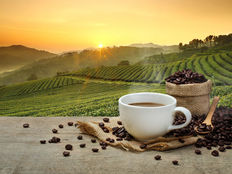 Coffee prices and related exchange traded note surged on Friday as the agricultural commodity was on pace to finish its first positive week for the year on rising supply concerns from major global producers.

Coffee futures rallied nearly 10% this week, marking its first positive weekly gain this year, after suffering through a steep decline in the wake of the coronavirus outbreak.

The sudden positive turn this week may be attributed to supply side concerns with weather and crop problems in Brazil and Uganda supporting coffee markets.

Specifically, Uganda has been battling locust swarms that have posed a major threat to livestock and key crops like coffee, a major export and key source of foreign exchange for the country, Reuters reported.

A single swarm of the insects can measure 40 kilometers wide by 60 kilometers long, or 25 by 40 miles, according to the U.N. Food and Agriculture Organization.

“They (locusts) are spreading like wildfire, so they are a real, major threat,” Stephen Byantwale, commissioner for crop protection at the ministry of agriculture for the U.N.’s FAO, told Reuters.

“There is an unprecedented threat to food security and livelihoods in the region,” the U.N. agency said.

Coffee prices have plunged this year after the coronavirus outbreak, with JO down 19.1% year-to-date as ICE Coffee futures slipped to $1.1135 per pound from $1.297 per pound at the start of the year.

The selling pressure was so severe that the wholesale price of arabica coffee beans even dropped below $1 U.S. a pound on the New York ICE exchange at the star of February, or a more than 30% plunge from where it was at the end of December, CBC reported.

“If people are worried about the virus,” Carlos Mera, a commodities analyst with Rabobank, told CBC, “they will not hang out in coffee shops,” so it makes perfect sense why that sudden lack of demand helped send prices lower.