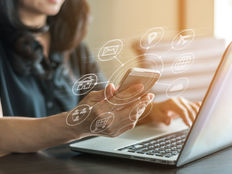 Consider This Consumer Cyclical ETF for 2020

The iShares U.S. Consumer Services ETF (IYC A-) is up more than 27% year-to-date, highlighting the strength in domestic consumer cyclical stocks. That’s a theme some analysts believe will persist in 2020.

IYC allocates nearly 10% of its weight to e-commerce giant Amazon (AMZN), which recently reported record holiday sales. What started as an book retailer has now turned into a global retail powerhouse as Amazon could be the most important company to watch in 2020. As such, investors should be keen on watching ETFs that have the heaviest holdings of Amazon.

Goldman Sachs now feels that the U.S. economy is ready to bounce back with certain stocks poised to reap the most upside from the economic recovery.

According to Goldman, cyclical stocks, those generally associated with strong economic growth, have led the record-setting stock market rally in the past three months. While the S&P 500 surged about 8% during the period, cyclical stocks have outperformed their defensive counterparts, staging a return of about 12%, Goldman noted. The investment bank prognosticates that this trend will continue given there is a rebound in the U.S. economy.

Goldman isn’t the only bank bullish on consumer discretionary names. Count Bank of America Merrill Lynch among the supporters of IYC.

“Our strategists see a bull scenario in the sector, with a higher than normal savings rates at this point in the cycle, that is supplemented by a more dovish Fed encouraging consumer to save less, and borrow/spend more. We see retail sales and consumer confidence have remained solid,” said the bank in a recent note.

“Meanwhile, trade tariffs on consumer goods seem to keep getting postponed. This sets a solid backdrop for an upside in the consumer discretionary sector. We believe iShares US Consumer Services ETF provides a great means to access this sector’s upside opportunity,” according to BofA.