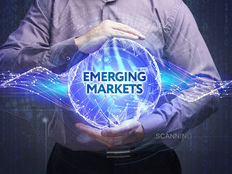 Coronavirus Is Crushing EM ETFs, but not This One

The Coronavirus pandemic is weighing on emerging markets stocks and the related ETFs, but the clear exception to that ominous trend is the Emerging Market Internet & eCommerce ETF (EMQQ C+).

EMQQ, the first ETF to focus on the universe of internet and eCommerce innovators in some of the fastest-growing markets in the world, provides investors with exposure to the internet and eCommerce sectors of the developing world. Many investors believe that the growth of consumption in emerging markets represents a significant growth opportunity as more than one billion people are expected to enter the consumer class in the coming decades. Increasingly, these consumers are using smartphones and broadband mobile connections to access the internet.

“Shares of the $556 million Emerging Markets Internet and E-commerce ETF, known as EMQQ, posted a total return of 12.3% this year, becoming the best-performing,” reports Bloomberg.

EMQQ tracks an index of leading Internet and eCommerce companies serving Emerging Markets. It seeks to offer investors exposure to the growth of online consumption in the developing world. EMQQ holdings operate in diverse markets such as India, China, Brazil, Turkey, Nigeria, and Indonesia, to name a few. To be included, the companies must derive their profits from Ecommerce or Internet activities and include search engines, online retail, social networking, online video, e-payments, online gaming, and online travel.

“The fund stands out amid record-shattering outflows in other emerging-market ETFs. Last week marked the 13th consecutive outflow of a record streak that has already cost the funds $21.9 billion, according to data compiled by Bloomberg. Investors have added $96.9 million to EMQQ this year,” reports Bloomberg.

Looking ahead, middle-income consumers will take on a greater role in the emerging and developing economies. According to McKinsey & Co. projections, there will be an expected 4.2 billion people among the consuming class by 2025, and the emerging markets will make up $30 trillion in consumption while developed markets will make up $34 trillion. In contrast, emerging market consumers accounted for $12 trillion in world consumption back in 2010.

“EMQQ benefits from outperforming stocks elsewhere. Shares of MercadoLibre Inc., the Latin American online marketplace, have gained 42% this year to linger near a record. South African technology investor Naspers Ltd. has returned 8% this year,” according to Bloomberg.