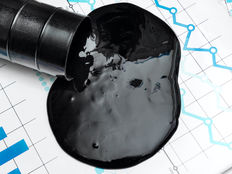 Crude oil has continued its barreling downdraft as Saudi Arabia is not backing down from the oil price war with Russia for market share, threatening another increase in its crude oil exports beginning in May, despite a growing global glut amid crashing demand.

“[T]he Kingdom intends to increase its crude oil exports, starting from May, by about 600 thousand barrels per day, bringing the total of Saudi petroleum exports to 10.6 million barrels per day,” an official at the Saudi Arabian Energy Ministry said on Monday, as carried by the official Saudi Press Agency.

“This increase came as a result of displacing crude with natural gas from the Al-Fadhili gas plant, as a fuel for generating electricity, and from the decrease in local demand for petroleum products due to the decrease in transportation from the precautionary measures in place to limit the coronavirus outbreak,” said Saudi Arabia, OPEC’s top producer, and the world’s top oil exporter, which continues to signal an aggressive supply surge amid profoundly depressed global demand.

Earlier this month, the Kingdom said it was planning on releasing the expansion of crude oil volumes on the market, targeting a boost of its crude oil exports to more than 10 million BPD in May, which would set new records.

The Saudis, who commenced an all-out price war for market share with Russia after Moscow resisted backing more profound cuts, will not only elevate April exports from the current 7 million BPD, but it will also extend exports in May by another 250,000 BPD from April. Now supply is projected to be 10.6 million BPD starting in May, as per the latest Saudi statement.

“Russia and Saudi Arabia show no signs of compromising in their standoff over oil supply,” National Australia Bank’s Rodrigo Catril wrote in a Monday note.

The oil market has been plunging on the news, with West Texas Intermediate crude oil down more than 6% on Monday, trading right around $20 a barrel after trading below $20 earlier in the session. Analysts have projected this number could continue to decline, reaching as low as $10 if nothing changes in the marketplace.

“There is potential this could go even lower as supply starts to flood storage space which could fill in the next month as a result of the combination of higher supply from the price war and lower global demand,” Joe Healey, an investment research analyst at The Share Centre, said in a note.

This is not all bad news for ETF investors who are using short oil ETFs to play the downdraft. The ProShares UltraShort Bloomberg Crude Oil (SCO A+) and the VelocityShares 3x Inverse Crude ETN (DWTI C) are up more than 12% and 17% respectively, as bearish oil investors capitalize on the downtrend.