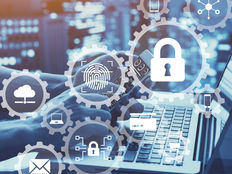 Even the coronavirus can’t dent the importance of cybersecurity and that speaks to the long-term viability of ETFs, such as the Global X Cybersecurity ETF (BUG).

Designed to track the Indxx Cybersecurity Index, the Global X Cybersecurity ETF holds a basket of companies that could benefit from increased adoption of cybersecurity technology, including companies whose principal business involves developing and managing security protocols to prevent intrusion and attacks on systems, networks, applications, computers, and mobile devices.

“Data breaches have become almost commonplace in recent years. Over the last few years, high-profile cases of cyber hacks have increased the demand for sophisticated software and security products,” according to Nasdaq. “Companies across the globe are growing more aware of the potential threat which is leading to a greater allocation of resources towards companies that help mitigate such risks.”

Given the greater attention to cybersecurity and the growing industry in an increasingly digitized age, investors can capitalize on the growth potential through sector-specific ETFs, including BUG. BUG is mid-cap ETF with a median market value of $4.4 billion among its 31 components, giving investors a growth profile in a fast-growing niche.

“The impact of cyberattacks has grabbed the attention of the White House, as President Trump has deemed cybercrime one of the biggest issues facing national security,” notes Nasdaq. “In addition, the President’s 2020 Budget is proposing to allocate $17.4 billion in spending to fund critical initiatives and research in the cybersecurity space, a 5% increase from the 2019 budget.”

Concerns over online security and cybercrime have reached an all-time high, with the cost of damages from these activities expected to cost $6 trillion annually by 2021. Data suggest there’s big growth ahead for cybersecurity.

“A forecast from International Data Corporation (IDC) estimated that worldwide spending on security-related hardware, software, and services will reach more than $151 billion in 2023 with a compound annual growth rate (CAGR) of 9.4% over the forecast period of 2019-2023,” according to Nasdaq.