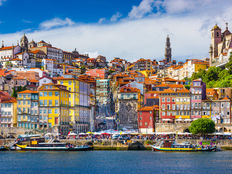 Don’t Miss Out On This Rallying Portugal ETF

The Global X FTSE Portugal 20 ETF (PGAL C) hadn’t done much of anything this year until mid-August. Since bottoming at its 52-week low a few months ago, the lone Portugal ETF listed in the U.S. is higher by almost 12% and there are reasons to believe the rally can continue.

PGAL, which turns six years old this month, follows the MSCI All Portugal Plus 25/50 Index. That benchmark features Portugal’s largest and most liquid companies. Over the near-term, bond markets may be signaling an extended rally for Portugal’s riskier assets.

“As with Greece, Portugal’s bond markets heated up over the last month after its sovereign bond yields also dipped into negative territory,” said Global X in a recent research note. “Attraction to Portuguese debt is in part owing to its ongoing economic recovery and improved financial health. Similar to Greece, but a few years ahead in its recovery, unemployment levels are beginning to normalize.”

Although PGAL allocates over 31% of its weight to utilities stocks, implying a level of conservative positioning, the fund is actually highly cyclical as highlighted by a combined weight of over 41% to energy and materials stocks.

“Similar to Greece, but a few years ahead in its recovery, unemployment levels are beginning to normalize. And while progress in both countries continues to be made on reducing non-performing loan (NPL) exposures, Portugal is further along,” according to Global X.

Due to the size, or lack thereof in Portugal’s equity market, there is some concentration risk in PGAL. Just two stocks – Galp Energia and Energia de Portugal – combine for over 46% of the fund’s weight.

PGAL trades at just over 14x earnings and is a high-yield instrument thanks to a dividend yield of 7.65%.