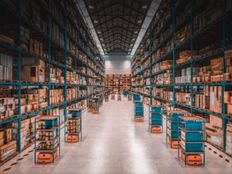 In last week’s note, we discussed e-commerce sales data in detail relative to headline numbers and concluded that e-commerce is still a long-term driver for overall retail sales, particularly for clothing and general merchandise. This note looks at e-commerce warehousing/logistics REITs which are the largest portion of the Alerian Disruptive Technology Real Estate Index (LANDX) (currently 56.7% of its index weight). (1)

E-Commerce has been a positive trend for logistics REITs.

While logistics REITs forecast a slight slowdown in e-commerce activity, it should continue to be a long-term driver as e-commerce retailers contribute to new leases and higher occupancy rates even with rents higher with inflation. On average, occupancy rates were around 98% across constituents in LANDX in 2Q22 compared to 97% in 2Q21. Although Amazon (AMZN) has been pulling back on its logistics warehousing space, other retailers are still driving demand. Prologis (PLD, 6.6% index weight) reports that Amazon was only 21% of its new e-commerce leasing by square footage, while other top ten global retailers (Wal-Mart [WMT], Alibaba [BABA], etc.) were 35%. The remaining 44% were other smaller retailers, illustrating how fragmented the e-commerce market has become despite Amazon’s large influence. (2) Surprisingly, Amazon only contributes 2-5% to total annualized rent despite being the largest tenant for most REITs.

Why do e-commerce retailers drive demand for logistics REITs? First of all, both online and traditional retailers are seeking warehouse locations closer to city centers to reduce the time and cost of transportation and delivery. Second, retailers need a greater amount of space for e-commerce distribution. According to Prologis, online retailers need three times the distribution center space than brick-and-mortar retailers due to greater inventory levels, higher product variety, larger outbound shipping space requirements, and increased returns. (3) And finally, some retailers may be looking to upgrade space to newer buildings as technology and automation become more important in warehouse operations including RFID chips and robots for “picking” inventory.

Supply chain issues are still prevalent with shipping costs still at record highs. Railroad strikes were narrowly avoided in mid-September but illustrated how easily further supply chain disruptions could occur. Because of the severe supply chain constraints seen earlier in 2020, many retailers (both traditional and e-commerce) are still wary of higher consumer demand coupled with longer shipping times which could put them in a position with little available inventory. Because of this, many retailers shifted their models from “just-in-time” to “just-in-case” and held on to larger levels of inventory. Current inventory-to-sales levels are still below pre-pandemic levels for clothing, which was one of the segments mentioned in our previous e-commerce note. General merchandise inventory-to-sales levels are slightly higher than pre-pandemic levels, but part of this may be attributed to the “safety stock” of inventory. Some large retailers like Wal-Mart have found themselves with too much inventory, while delivery companies like FedEx (FDX) have also warned of a deceleration in demand. These downturns are somewhat expected when consumer demand preferences shift as rapidly as they did over the past two years—for example, consumers are now buying less home improvement goods and furniture as they did when they were staying at home. Additionally, rising inflation remains a factor that creates uncertainty for consumer discretionary spending. But long-term, these issues should subside, and inventory-to-sales ratios should stabilize at least to pre-pandemic levels—although estimates from PLD predict that ratios will actually settle 5-10% above pre-pandemic levels due to retailers holding more safety stock, particularly in cases where transportation costs outweigh storage costs. (4)

E-commerce growth continues to drive higher demand, new leases, and higher occupancy rates in logistics warehousing. Although REITs have seen a large sell-off in early 2022, LANDX has still been able to outperform both the S&P 500 (SPX) and the FTSE Nareit All Equity REITs Index (FNER) on a total return basis, while offering higher yields than broader equities.

(4) Taking the Bullwhip by the Horns: Inventory Examined | Prologis