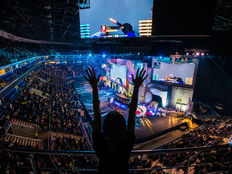 The VanEck Vectors Video Gaming and eSports ETF (ESPO) has recently been setting a torrid pace, surging nearly 7% this month on its way to a series of record highs and a year-to-date gain of almost 16%.

A new survey confirms some of the bullishness surrounding the eSports investment thesis.

What this Means for ESPO ETF

ESPO components may include developing video games and related software, streaming services, and/or those involved in eSports events. To be included in the index, companies must generate at least 50% of their revenues from video gaming or eSports, which allows ESPO to have the highest concentration, among U.S.-listed ETFs, of pure play names participating in this fast-growing space.

The eSports theme is seen as a major disruptive force in the technology and sports arenas, indicating ESPO could be on the cusp of some impressive long-term growth.

“Advertisers seem to agree. They are expected to spend over $200 million on digital spots for esports in the U.S. by 2020, according to an eMarketer report,” notes Barron’s.