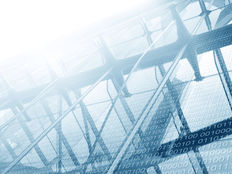 An ETF For Infrastructure's Future

“Public transportation systems should provide commuters with affordable and efficient means of traveling mid to long-range distances, but in US cities, they are either overextended or nonexistent,” said Global X in a recent research note. “The next generation of infrastructure should make them a viable option for urban and suburban mobility and promote their widespread adoption. Underutilized systems like high-speed water taxis should be built out, with new ports and routes adding to their feasibility.”

How infrastructure dollars are spent is equally as important as knowing those dollars are earmarked for infrastructure in the first place. During 2016, presidential campaign, Trump promised to spend $1 trillion to shore up America’s sagging infrastructure, but politicians have clearly agreed to exceed that number. That promise is likely to be reiterated on the campaign trail this year.

“Transportation infrastructure should be assessed holistically. Optimized point-to-point travel requires interconnected transit systems to enable route efficiency assessment,” according to Global X. “Mobility as a Service (MaaS) addresses this idea, integrating public and private transportation options and presenting them to the public at a single endpoint – a smartphone. In a MaaS model, users can choose between affordability, speed, and comfort across the multitude of transport modes available.”

The $185 million PAVE holds 93 stocks from over a dozen industry groups, giving it one of the deepest benches and widest reaches among all infrastructure ETFs.

Compared to rival funds, PAVE is light on utilities and energy stocks while tilting heavily toward the cyclical industrial and materials sectors (94% of the fund’s weight).