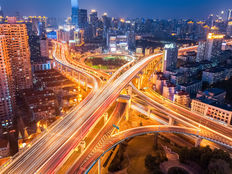 Infrastructure has proven its mettle as an investment theme, one that helps investors fight inflation while lower correlations to traditional asset classes, such as common stocks and bonds. Problem is many infrastructure ETFs are global and don’t focus solely on the domestic opportunity set.

“America’s outdated infrastructure is in dire need of a 21st century overhaul – a D+ grade from the American Society of Civil Engineers’ (ASCE) says as much,” said Global X in a recent research note. “Deteriorating roads, waterways, airports, and seaports more than just inconvenience the American people; they are liabilities to the country’s economic future, affecting employment, productivity, public health, and the average quality of life.”

PAVE focuses largely on domestic infrastructure, as companies must be listed in and derive more than 50% of their revenue from the US. The fund may include large-, mid-, and small-cap companies.

As has been widely noted, infrastructure ETF such as PAVE could be in focus this year with 2020 being a presidential election year.

“But the 2020 presidential election should bring the infrastructure debate into the spotlight,” according to Global X. “Candidates across the political spectrum are articulating their infrastructure development plans. Presidential hopefuls, policymakers and investors alike should look beyond headline dollar amounts, which will be in the trillions of dollars, and focus on more nuanced details around what tomorrow’s infrastructure ought to look like.”

The $185 million PAVE could also be a credible play for long-term investors because infrastructure needs aren’t confined to election years.

“The US requires $2T of additional investment over the next 10 years to adequately repair and replace existing infrastructure,” notes Global X. “Funding needs to span myriad segments from physical infrastructure to the systems that enable commerce, transportation, and a functional society, representing possible investment across many sectors, industries, and end-markets.”