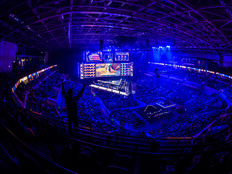 For Esports ETFs, It's All About Fun and Gains

Finding opportunities in today’s challenging market environment is not just fun and games. In certain sectors amid social distancing measures and renewed government lockdowns, certain ETFs are offering investors fun and gains, like those that focus on Esports.

Esports, or competitive gaming, will be a sector in 2020 that will continue to garner investor interest as the proliferation of viewers will make the industry a multimedia powerhouse with lucrative corporate sponsorships. This should be welcome news for the Global X Video Games & Esports ETF (HERO B-), which has churned out a year-to-date gain of 70% based on Yahoo Finance figures.

HERO “seeks to invest in companies that develop or publish video games, facilitate the streaming and distribution of video gaming or esports content, own and operate within competitive esports leagues, or produce hardware used in video games and esports, including augmented and virtual reality,” according to Global X.

There’s no denying the global outreach that Esports has had, especially now with the pandemic. Take the 2020 “League of Legends” World Championship gaming tournament for example:

“The 2020 “League of Legends” World Championship came to a close on Saturday, providing a triumphant if slightly muted exclamation point for the 10th season of one of the world’s most popular professional esports events,” a NBC News report said. “After starting with 22 professional teams from around the world, South Korea’s DAMWON Gaming defeated China’s Suning to take home the Summoner’s Cup and a share in the prize pool worth millions of dollars.”

“In the last few years, more people have watched this tournament than the Super Bowl or the NBA Finals,” the report added. "For 2019’s event in Paris, Madrid and Berlin, players performed before packed stadiums and millions watching online from around the world. This year, because of Covid-19 protocols, the venue is a single city (Shanghai), and the viewership is mostly online (but expected to be even larger).