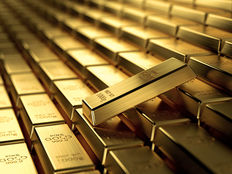 Despite an inflow of assets into gold over the last couple of days, as investors flee the stock market as fears of a global viral contagion take over, some analysts are admonishing investors that the price of the shiny metal could be getting too lofty

With gold prices climbing nearly 21% over the last year, ABN AMRO is warning investors of a possible price correction in the coming weeks, while remaining bullish on the lustrous metal in the longer-term.

“Prices have advanced already significantly … Gold prices are at our September target, silver at the December target and platinum at our June target,” the Dutch bank’s senior FX & precious metals strategist Georgette Boele said in a report published on Friday. “We continue to expect a price correction in the coming weeks and months.”

The February Comex gold futures climbed to a nearly seven-year high of $1,613.30 an ounce on Jan. 8 amid tensions over a potential war between the U.S. and Iran. Fears of a war were quickly quelled however, and prices subsequently fell back as tensions de-escalated, with gold bottoming at $1,536.40 an ounce before the shiny metal began working its way higher again.

Now with the coronavirus scare ramping up, gold has climbed back over $1580, up 4% over the last month, and on its way toward $1600 an ounce once again.

January is typically bullish for gold, but it does not guarantee that the precious metal will continue to steadily rally higher, the report stated.

“A good start to the year is not a guarantee of higher prices at the end of the year. So, we would wait and look for a correction to take place,” Boele wrote.

Given that overall bullish gold positioning has become increasingly overcrowded, and has been for some time now, investors may be better off waiting to add positions, noted the strategist.

Investors who are bullish on gold can look at a time-tested ETF like the SPDR Gold Trust (GLD A-) or a leveraged gold fund like the VelocityShares 3x Long Gold ETN (UGLD C+) if they are more risk-on and experienced.