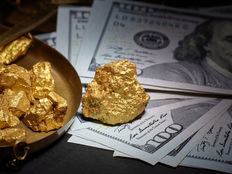 Gold miners and sector-related exchange traded funds were leading the charge in the equity side, despite the continued fall-off in precious metals prices.

Gold futures were at their lowest level since December after the Federal Reserve’s decision to slash interest rates failed to avert a broader sell-off in the global markets.

Traders were “exiting everything which is giving them profit,” Chintan Karnani, chief market analyst at Insignia Consultants, told MarketWatch, pointing out that a technical selloff triggered when gold fell below $1,500.

However, gold did not fall below key support at $1,440, which “resulted in short covering and subsequent buying in gold,” Karnani added.

Some attributed the weakness to what has traditionally been a safe-haven bet to the sudden demand for liquidity in face of sudden losses.

“We are in a scenario where investors are selling whatever they can,” Carlo Alberto De Casa, a chief analyst at ActivTrades, told Bloomberg.

Gold “is being sold to generate liquidity and to offset losses in other markets,” Alexander Zumpfe, a trader at Heraeus Metals Germany, told Bloomberg. “In some cases, investors also sell their gold holdings in order to keep the value of the precious metal constant in their overall portfolio. Due to the lower value of the equity share, gold would otherwise take up a larger share in terms of value.”

Meanwhile, some may be looking at gold miners as a cheap opportunity in an already oversold area of the market.

“Gold bullion went negative for the year as of Friday, as investors liquidated their holdings to ride out the volatility. And although they haven’t sold off as deeply as the rest of the market, gold mining stocks look cheap now, meaning it may be time to consider adding to your exposure,” according to Frank Holmes, CEO and chief investment officer of U.S. Global Investors, which offers the U.S. Global GO GOLD and Precious Metal Miners ETF (GOAU).

“We could see very attractive revenue and cash flow from gold mining stocks this quarter,” he added.