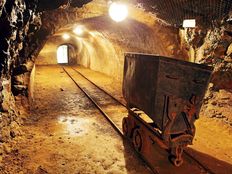 Gold prices scrambled above $1,700 on Monday, notching a seven-year high as stocks plummeted to fresh lows amid a coronavirus-fueled sell-off that drove investors into safer assets.

This could still be early in the rally, however, as analysts have said that the precious metal could continue to climb considerably higher.

Gold prices struggled to move higher following Federal Reserve’s emergency 50-basis-point cut, but according to one market analyst, if history is any indication, the precious metal has plenty of upside potential.

Ryan Giannotto, director of research at GraniteShares, told Kitco that after the last time the Federal Reserve announced a 50-basis-point inter-meeting rate cut, back in 2008, gold prices commenced a significant bull run, climbing over 17% that year. This, of course, coincided with the stock market plummeting.

“We have seen seven emergency cuts before, and gold has rallied on 26% on average during the first two years follow each of those events,” he said. “It would be very unwise to rule out a move to $2,000 by the end of the year.”

“Gold could go through $2,000 this year, especially post the Federal Reserve’s emergency action last week and the follow-through we expect from them,” Clark Fenton, portfolio manager of diversified returns at RWC Partners, said in a research note on Monday.

“It may look like gold has already rallied strongly, but investors have not missed their opportunity – we think it has a long way to go from here, not simply because it’s commonly viewed as a safe haven but because the world has now changed fundamentally. We’ve never seen real rates this low globally, so investors will be forced to search beyond bonds to preserve their wealth,” Fenton added.

This is even more good news for gold bugs, who have seen their portfolios accelerate higher this year, as ETFs have followed suit. The GraniteShares Gold Trust (BAR ) and the iShares Gold Trust (IAU A) are both up over 20% in the last year. Meanwhile, for investors with a bit more risk appetite, the VelocityShares 3x Long Gold ETN (UGLD C+) is up 5.4% just today.