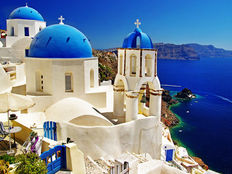 Greece ETF Rallies with Snap Elections on the Books

The divided politics and a rise in populist sentiment dragged on Greek markets, but after a request by left-wing Prime Minister Alexis Tsipras to dissolve parliament, followed by a scheduled early national election, the country-related exchange traded fund is surging.

The Global X MSCI Greece ETF (GREK C), the only exchange traded fund dedicated to Greek stocks, was among the best performing non-leveraged ETFs of Monday, climbing 3.2% toward a 13-month high.

Greek equities rallied after the prime minister stated he urged for early elections to avoid months of campaigning that might hinder the bailed-out country’s economy, according to the Associated Press.

Greece will hold a national election on July 7, or three months before its previous scheduled date.

Tsipras’ decision came as a result of his governing party’s heavy defeat in the May 26 European parliamentary elections. The Syriza party came in more than 9 percentage points under the main opposition, conservative New Democracy party. Early polls also suggested the New Democracy is likely to win the early national election.

The divided politics and rise of populist parties were some reasons why international investors have shied back from the Eurozone, notably Greek’s markets. Greece was among the first to succumb to populist pressure, and the country is now also the first to reject it, bolstering investor optimism that a return to normal could help stabilize the economy.

Part of the move in Greek markets is attributed to the populist discount, or the discount investors are required to hold Greek stocks under a populist government. Looking ahead, the new government is less likely to undo some structural reforms that have been undertaken in the past. Furthermore, the risk of higher labor costs, less labor market flexibility and an erosion of wage competitiveness would decline under a New Democracy-led government.

For more information on the Greek markets, visit our Thematic Investing Channel.