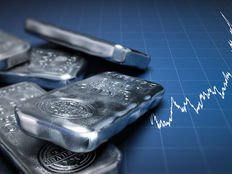 Hi Ho Silver And Away With This Global X ETF

The epic rally in silver isn’t leaving miners and the related ETFs behind. In fact, those assets are leading the way. Just look at the Global X Silvers Miners ETF (SIL B-), which gained nearly 5% on Wednesday, extending its one-month gain to 31.50%.

Silver also climbed on expectations of more stimulus to help the global economy, with the European Union set to unleash a rescue package and the United States working on the second round of coronavirus pandemic relief. Traders are using precious metals to hedge against rising inflationary pressures as a result of the historic stimulus from world governments and central banks.

“Earlier this week, Canaccord Genuity analysts cut their rating on Pan American Silver to Hold from Buy and lifted their rating on Coeur to Buy from Hold based on potential returns to target prices,” reports Andrew Bary for Barron’s.

It has been a while since silver was in style, but that’s changing for the better as easy monetary policies around the world decrease the allure of fiat currencies and government bonds. The silver bulls are running as the metal reached its highest level since 2014, soaring 80% from its 2020 low. Now’s the time to check out silver-backed exchange-traded funds (ETFs) for asset diversification.

“Known as the poor man’s gold, silver tends to be more volatile than gold and silver mining stocks are even more volatile than gold stocks. Silver is more sensitive to industrial demand, which accounts for about 50% of demand, against just 10% for gold. Silver briefly touched a low of around $12 an ounce in March amid concerns collapsing economic activity,” according to Barron’s.

Precious metal investors, particularly in silver, should be seeing less demand for safe haven assets as economies reopen and investors turn up the risk dial. However, silver has been moving higher in conjunction with equities, but can this bullishness continue?

“In a recent note, RBC Capital Markets analysts projected physical deficits for silver in 2020 and 2021, compared with ‘modest surpluses previously. This primarily reflects a stronger rebound in economic activity than we had expected and we now forecast demand in 2020 down -4% vs. -17% previously. We have also incorporated a material ETF inventory build, resulting in even larger net deficits,’” reports Barron’s.