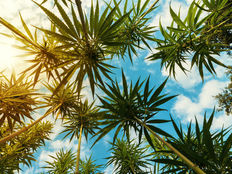 This year has been trying for cannabis investors. Whether they’ve opted for individual stocks or new or established ETFs, marijuana assets of all stripes have been punished.

In its brief time on the market, the Global X Cannabis ETF (POTX), which debuted in December, has incurred some punishment, but 2020 could bring better fortune for POTX and marijuana equities.

POTX follows a benchmark that holds “companies involved in the legal production, growth, and distribution of cannabis and industrial hemp, as well as those involved in providing financial services to the cannabis industry, pharmaceutical applications of cannabis, cannabidiol (i.e., CBD), or other related uses including but not limited to extracts, derivatives or synthetic versions,” according to Global X.

“In 2020, Canada’s producers are looking forward to improved retail distribution, as populous provinces such as Ontario allow more stores to open,” reports Bill Alpert for Barron’s. “The growers are hoping for incremental sales from newly-allowed products like vapes, chocolates, and beverages. With an expensive bottling plant, Canopy has bet that cannabis drinks can take market share from beer and liquor.”

Canaccord Genuity analyst Bobby Burleson “is excited over the prospects of U.S. operators, when recreational pot sales rev up in Michigan and Illinois. As an election year, 2020 could see marijuana ballot initiatives in at least 16 states, including New York, Florida, New Jersey, Pennsylvania, Ohio, and Virginia,” according to Barron’s.

The legalized cannabis industry is also a nascent businesses with huge opportunity. New Frontier Data estimated that the consumer market value was nearly $344 billion in 2018, with Asia making up over half of that. There were also 263 million cannabis users globally over the past year.

Related: POTX Positioned For a Rebound With Pleasant Surprise

“Cannabis tourism to states where pot is legal could pressure regional laggards, as holdout states worry about losing tax revenue. Burleson notes that Michigan stores are opening along that state’s borders with Ohio, Indiana, and Wisconsin.” according to Barron’s.

The average market value of POTX’s holdings is $712 million, meaning the fund could also benefit from small-cap leadership in 2020, assuming that scenario comes to pass.