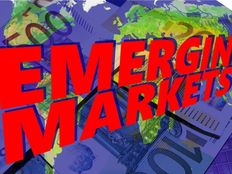 Brazil has rapidly become of the epicenters of the coronavirus in Latin America, a scenario that’s slamming stocks in the region’s largest economy.

The iShares MSCI Brazil ETF (EWZ B+), the largest Brazil-related ETF, gained almost 4% on Thursday, but underscoring how severely the country’s financial markets have been drubbed, the fund has lost nearly half its value this month as the real has tumbled to multi-year lows against the dollar.

Currently, economic indicators suggest the Latin American market may be slipping into a recession. Slumping commodities prices are also problematic for the country and its markets because commodities are denominated in dollars, a strong currency at the moment.

“It does export slumping commodities like oil and iron ore, but its $3 trillion-plus economy is mostly driven domestically. Still, bargain hunters had better pause for breath before pouncing on devalued Brazilian stocks,” reports Craig Mellow for Barron’s.

Bet on Brazil, but Save it for Later

Political and economic factors continue to weigh on Brazil as the country continues to forge on after undergoing an overhaul in its leadership. Now, previously popular President Jair Bolsonaro is facing calls for his job over critics assert has been poor handling of the coronavirus situation.

“One reason for the market’s collapse this year is previous outperformance,” according to Barron’s. “The Brazil ETF doubled in 16 months after business-oriented President Jair Bolsonaro swept to power in late 2018, while global emerging markets declined. That run was buoyed by local retail investors trying their hand at stocks, as the central bank slashed interest rates on their traditional savings products.”

EWZ seeks to track the investment results of the MSCI Brazil 25/50 Index, which consists of stocks traded primarily on B3 (the largest Brazilian exchange). The index is a free float-adjusted market capitalization-weighted index with a capping methodology applied to issuer weights so that no single issuer of a component exceeds 25% of the underlying index weight, and all issuers with weight above 5% do not cumulatively exceed 50% of the underlying index weight.

“Brazil does have resources to face the pandemic and position its markets for a rebound. The plunge in interest rates has slashed the government’s interest expenditure to 4% from 14% of gross domestic product, leaving room for an aggressive fiscal response,” reports Barron’s.