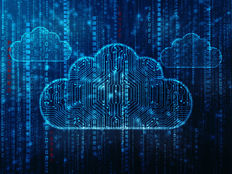 As has been widely noted, the Global X Cloud Computing ETF (CLOU), which debuted in April, is one of this year’s most impressive success stories among new ETFs. More important than its asset-gathering acumen, CLOU has plenty of catalysts to keep rolling higher in 2020.

CLOU, which debuted in April, follows the Indxx Global Cloud Computing Index, the fund holds a basket of companies that potentially stand to benefit from the continuing proliferation of cloud computing technology and services. The cloud computing industry refers to companies that (i) license and deliver software over the internet on a subscription basis (SaaS), (ii) provide a platform for creating software applications which are delivered over the internet (PaaS), (iii) provide virtualized computing infrastructure over the internet (IaaS), (iv) own and manage facilities customers use to store data and servers, including data center Real Estate Investment Trusts (REITs), and/or (v) manufacture or distribution infrastructure and/or hardware components used in cloud and edge computing activities.

The often mentioned uptick in cloud spending by corporations remains a credible tailwind for CLOU heading into the new year.

“Despite having been around for over a decade, most companies have only completed roughly 20% of their transitions to the cloud. The cloud is a long-term trend. It might be more precise to call cloud the long-term trend,” reports InvestorPlace.

The increasingly digital and connected world that forms the backdrop for CLOU’s launch is exhibiting significant growth and is expected to continue to grow over the coming years. The cloud computing industry that was estimated to be worth $188 billion in 2018 is expected to be worth over $300 billion by 2022, a nearly 15% annualized growth rate.

“Clouds save money because they’re naturally efficient. Clouds can scale quickly because they’re self-service. You can budget a cloud, subscribing to services rather than building anything yourself. Anything you could once do on a desktop or in a data center, you can do in a cloud,” according to InvestorPlace.

Declining costs in cloud adoption and increasing ease of use are among the factors driving the cloud computing boom. Several of CLOU’s marquee components have first-mover advantages in various cloud niches and are building attractive competitive moats in the space.