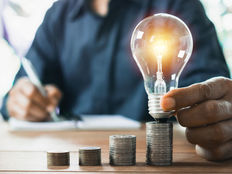 A New Light Could Be Shining On Energy ETFs

The Energy Select Sector SPDR (XLE A), the largest equity-based energy ETF, is lower by more than 7% this month and its year-to-date gain is close to evaporating, but some market observers believe battered energy stocks are ready to turn higher.

XLE’s recent woes have the ETF trading below its 50- and 200-day moving averages, giving short-term traders little reason to approach the fund from the long side. XLE hasn’t closed above its 200-day line since late April.

The trade war with China is intensifying pressure on oil prices and energy stocks, and some analysts believe oil supplies are trending higher. Looking ahead, Citigroup and JPMorgan Chase analysts project global supply will expand roughly one million barrels per day more than total demand in 2020, contributing to a surplus each quarter of next year.

“We’re getting in this time of the year, when you get to the last three or four months of the year, that any time an underperforming group and under-owned group — the energy sector is less than 5% of the S&P — when it starts to rally, that attracts a lot of the institutional investors that are looking to make up performance. And the best way to do that is with an under-owned group that’s playing catch-up,” said Matt Maley, equity strategist trader at Miller Tabak, in an interview with CNBC.

Other analysts have recently made encouraging comments about some of XLE’s marquee components, such as Dow component Chevron (CVX).

“Chevron is well-positioned to both return significant free cash flow to shareholders and fund its…compound annual growth rate guidance,” according to the bank.

The expected global supply glut is also the latest threat to the Organization of the Petroleum Exporting Countries and other producers, which have already enacted production caps in an attempt to stabilize prices and balance the market. Predictably, geopolitical headwinds factor into the oil equation.

“What’s happening right now is obviously being driven by Saudi Arabia and that will be very, very short term. Those spikes tend to come and go with concerns like this. However, this supply issue actually will put a floor underneath oil,” said Gina Sanchez, CEO of Chantico Global, in an interview with CNBC.