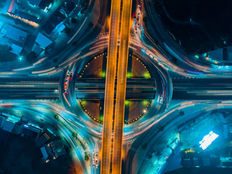 Infrastructure spending is seen as one of the rare nonpartisan issues politicians consider and with the U.S. economy on solid ground, the time appears right for the U.S. to improve and update obsolete infrastructure.

PAVE, which is up 16% this year, tries to reflect the performance of the Indxx U.S. Infrastructure Development Index, which is comprised of companies focused on domestic infrastructure development, including those involved in construction and engineering; production of infrastructure raw materials, composites and products; industrial transportation; and producers/distributors of heavy construction equipment.

While he was campaigning, President Donald Trump’s pledge to spend $1 trillion shoring up U.S. infrastructure needs was seen as a potential catalyst for the related exchange traded funds. Still, it could take some time for infrastructure ETFs to see the full benefit of Trump’s still nascent infrastructure plans.

“Making a real effort to update the U.S. infrastructure would make the most sense now while the economic environment can still support the investment,” reports Forbes. “Acting now would bolster and extend the current economic growth cycle and provide the foundation for decades of growth in the future. Conversely, putting it off until after a recession has begun would push the U.S. back even further. And with the U.S. already decades behind in terms of infrastructure development, waiting simply makes it more difficult.”

PAVE holdings are “involved in the production of raw materials, heavy equipment, engineering, and construction,” according to Global X. The ETF recently turned two years old and has more than $127 million in assets under management.

“In its research, the Federal Reserve Bank of San Francisco stated that for each dollar a state receives in federal highway grants, that state sees an annual economic output boost of at least two dollars,” according to Forbes.

The cost of ignoring infrastructure needs is far higher and with a presidential election year looming, politicians could embrace the idea of more infrastructure spending, potentially boosting PAVE in the process.

For more information on the thematic investing sector, visit our Thematic Investing Channel.