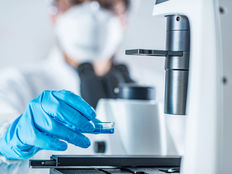 Preparing For a Biotech Bounce With XBI

The SPDR S&P Biotech ETF (XBI B-) and rival biotechnology ETFs are coming off the third quarter and have recently been beset by outflows, but some market observers believe the group offers rebound potential.

The biotech segment and broader healthcare sector have also underperformed the broader market as investors exited positions in response to growing discourse over policy proposals aimed at reducing drug prices in Washington. While some argued that impeachment talks might have drawn politicians’ attention away from the drug pricing issue, scrutiny is unlikely to relieve the pressure.

As an equal-weight ETF, XBI is more levered to mid- and small-cap biotech stocks, meaning the fund can participate in a small-cap rally.

“I like the focus on the smaller biotech firms with 67+% being below midcap in size though none of the Top 10 fit those categories,” according to Seeking Alpha.

Adding to the case for biotech investments is that, broadly speaking, valuations in the group currently are not excessive. That is something to consider when noting biotechnology stocks often trade at premiums to the healthcare sector and the broader market.

Healthcare stocks are also showing attractive valuations relative to other defensive sectors, which are richly valued. Biotechnology historically trades at multiples that are elevated relative to broader benchmarks, but after last year’s struggles for biotechnology names, analysts see value with some big-name biotech stocks.

“Who controls Congress and the White House after the 2020 elections will greatly affect the future profitability of the BioTech companies,” according to Seeking Alpha.

XBI is an equal-weight fund meaning the ETF is not heavily dependent on large-cap biotech names. That also means XBI is home to some credible takeover targets, which is potentially good news for investors at a time when healthcare M&A activity is surging.