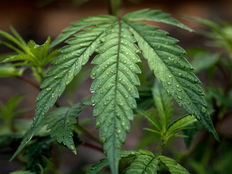 The Global X Cannabis ETF (POTX) and rival marijuana ETFs traded lower again Monday, but relief for the downtrodden asset class could be on the way as researchers believe they’ve uncovered the cause behind a recent spate of vaping-related deaths and illnesses that have plagued cannabis equities.

POTX, the newest of the US-listed marijuana ETFs, tracks a benchmark that holds “companies involved in the legal production, growth and distribution of cannabis and industrial hemp, as well as those involved in providing financial services to the cannabis industry, pharmaceutical applications of cannabis, cannabidiol (i.e., CBD), or other related uses including but not limited to extracts, derivatives or synthetic versions,” according to Global X.

“With federal researchers announcing Friday that they’d found a toxin in the lungs of every patient they tested with vape-related injuries, American’s legal cannabis sellers can hope for a solution to a mystery that’s killed 40 people and choked the young industry’s sales growth,” reports Bill Alpert for Barron’s.

The U.S. Centers for Disease Control and Prevention (CDC) discovered that vitamin E is likely the culprit behind the vaping-related fatalities and illnesses. Vitamin E is healthy when consumed in traditional pill form, but it can be dangerous when inhaled.

While the vaping controversy could soon be put to rest, there are other tests looming for POTX and rival pot ETFs, namely a packed earnings calendar for the major Canadian producers this week.

“Canada’s four largest pot companies by market value will report results for the quarter ended Sept. 30 this week. Cronos Group (CRON.TO)(CRON) will report before the opening bell on Tuesday, and Tilray after the markets close. Thursday will be bookended by Canopy Growth results in the morning and Aurora Cannabis results in the evening,” according to Yahoo Finance.