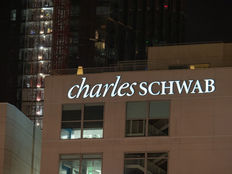 IAI includes exposure to investment banks, brokerages and stock exchanges that may have more to gain from trading activities.

Some industry observers speculated that consolidation would be the order of the day after Schwab last month eliminated commissions on all equity and ETFs trades, prompting rivals, such as TD Ameritrade to follow suit.

Schwab’s move to eliminate commissions follows an announcement last week that Interactive Brokers would implement similar zero commissions on its ETF and stock trades. More than half of Schwab’s revenue is generated from the financial advisor community that has client’s custody at Schwab suggesting the race to the bottom in pricing crosses many aspects of the asset management industry.

“The major brokers have dropped stock- and ETF-trading fees to zero. And low interest rates have hurt results because the brokers depend on earning interest from their clients’ deposits,” reports Avi Salzman for Barron’s.

Is There More Rationalization

There’s also the question of whether or not there is more rationalization between these various brokers in 6 or 12 months for them to make their margin almost as big as before, but through a bid spread wider. However, the counter to that is how automated it all is, which will keep the margin from becoming as large.

One of the main things to be seen from this, so far, is how stocks are getting hit after there’s been a relatively comfortable setup for such a long time. Although, 10 to 20 years ago, it would be hard to imagine such a setup working the same way, with Schwab, at that time, being the cheapest.

“Merging gives the companies more scale, so they can earn fees from a higher asset base. Barron’s pointed out in a recent cover story that Schwab could be a winner in the shakeout. It added 142,000 clients last month after eliminating commissions, a 31% jump from the previous month,” according to Barron’s.

The two stocks combine for over 9% of IAI’s roster.