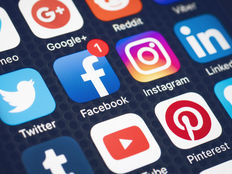 There’s no doubt that social media plays a prominent role in promoting business brands around the globe. China, in particular, is tapping into the potential of social media as a revenue driver for its luxury brands.

Social media apps like Tencent Holding’s WeChat have played a major role in Chinese luxury brands. According to a Barron’s report, “for luxury goods makers, the Chinese social media app and others like it have never been more important.”

The potential outreach of social media apps is translating into big sales for China’s luxury market over the next five years.

“China is the most digitally advanced country in the world, when we look at e-commerce penetration, digital payments penetration, ‘new economy’ concentration. Young Chinese consumers are even more ‘plugged in’, and even more important in driving the present and future fortunes of global luxury brands,” said Solca.

Exchange-traded fund (ETF) investors looking to get social media exposure can look at funds like the Global X Social Media ETF (NasdaqGM: SOCL). SOCL seeks to provide investment results that correspond generally to the price and yield performance of the Solactive Social Media Total Return Index. The index tracks the equity performance of the largest and most liquid companies involved in the social media industry, including companies that provide social networking, file sharing, and other web-based media applications.

With technology and social media as the focus for Chinese equities, here are three China tech ETFs to consider: