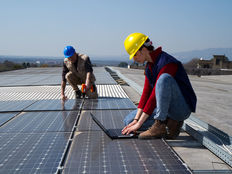 Solar ETF Up 35% YTD, But Be Careful Over Summer

Up nearly 35% year-to-date, the Invesco Solar ETF (TAN B) is one of this year’s best-performing non-leveraged exchange traded funds (ETFs), but that status could be threatened over the next several months if TAN’s historical seasonality repeats.

TAN, which is nearly 12 years old, follows the MAC Global Solar Energy Index. That index “is comprised of companies in the solar energy industry. The index is computed using the net return, which withholds applicable taxes for non-resident investors,” according to Invesco.

While TAN has been sizzling through the first four months of 2019, the May through November period is often taxing on the benchmark solar ETF. Entering Monday, TAN was up almost 10% month-to-date.

“That’s right in line with TAN’s average positive return of 9.67% for April — which then precedes a seven-month losing streak from May right into November, before the ETF flips narrowly positive in December,” reports Schaeffer’s Investment Research. “Within that historically weak stretch, June has the lowest percentage of positive returns, at only 27%. During both June and August, meanwhile, TAN averages a monthly loss in excess of 2%.”

May Showers For TAN ETF

Historical data indicate the last two months of the second quarter, May and June, are rarely positive for TAN and the entire is equally poor for the solar ETF. Worse yet, the fund usually starts the fourth quarter in lethargic fashion before notching modest December upside.

“However, it may be after Labor Day where TAN suffers its heaviest losses. The ETF averages a drop of 3.27% in September, followed by mean declines of 5.21% in October and 4.45% in December. Plus, its average negative return is in the double digits for all of the last four months of the year. Based on this breakdown, the worst for TAN may not come until around the mid-to-late fourth quarter,” according to Schaeffer’s.

For more information on the renewables space, visit our renewable energy ETF category.