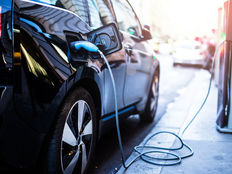 This Electric Vehicle ETF Will Rev Up Some More

The Global X Autonomous & Electric Vehicles ETF (DRIV) is higher by nearly 6% over the past month in what could be the latest sign that the electric vehicle theme is accelerating with investors.

DRIV debuted just over a year and a half ago and tracks the Solactive Autonomous & Electric Vehicles Index. Component companies include firms “involved in the development of autonomous vehicle software and hardware, as well as companies that produce EVs, EV components such as lithium batteries, and critical EV materials such as lithium and cobalt,” according to Global X.

Important to the DRIV thesis is that the EV industry is still in its early innings. Currently, electric vehicles represent a small percentage of new automobiles sold around the world and cars on the road, but that percentage is expected to increase in a big way over the next several years.

“Electric vehicles accounted for just 2% of new global auto sales in 2018. However, by 2030, we forecast EVs will be 20% of all cars sold, while the market expects just 15%,” according to Morningstar. “We believe EVs will reach cost and functional parity with internal combustion engine vehicles by 2025. As battery costs decline and manufacturing scale is realized, we forecast electric vehicles will reach cost parity with internal combustion engines.”

There are signs that there is a lot of pent up demand among consumers who want to embrace the technology. In 2017, electric vehicle sales represented 1.7% of all vehicle sales globally, exceeding 1 million for the first time and rising 51% year-over-year. The rate could continue to accelerate as a result of EVs becoming more economical than gas-powered cars and as a result of pro-climate regulatory changes pushing to ban gas-powered cars.

Increased battery capacity and proliferation of needed charging infrastructure in major auto markets throughout the world is expected to facilitate increased adoption of electric vehicles.

“With costs and function equal, the amount of charging infrastructure in a region will be the wild card that either spurs or limits EV adoption,” according to Morningstar. “We think improvements in cost, range, and charging time will be rolled out globally given the size and scale of major automakers and battery producers. In contrast, chargers need to be saturated and nearby to benefit an EV owner.”