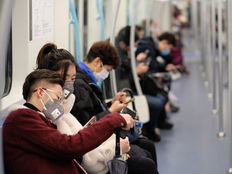 E-commerce is being touted as a beneficiary of the shelter-in-place lifestyle being experienced across the U.S. and some parts of China, but even as the latter says it’s notching fewer coronavirus cases and gradually reopening vital parts of its economy, online retail is poised to benefit.

That could be a catalyst for ETFs, such as the Global X MSCI China Consumer Discretionary ETF (CHIQ B-).

Alibaba (BABA) is CHIQ’s largest holding at 9.21% of the fund’s roster.

CHIQ and the Coronavirus

“Alibaba and Tencent-backed JD.com Inc. reported that online sales of grocery, fresh produce and consumer essentials grew manifold during the quarantine, driving up the country’s online retail sales of physical goods by 3% to 1.123 trillion yuan in the first two months of the year,” according to S&P Global Market Intelligence.

JD.com (JD) is CHIQ’s second-largest holding at a weight of 9%.

Based purely on sheer size, China’s Internet and mobile phone markets are substantially larger than those in the U.S. Additionally, brick-and-mortar infrastructure is slack in China, a sign that up-and-coming Chinese consumers are adept at and prefer to buy online. Importantly, CHIQ components are taking steps to lure buyers at a trying time for the world’s second-largest economy.

“libaba, JD.com and Pinduoduo have pledged to waive commission rates and subsidize deliveries to help merchants overcome financial difficulties during the outbreak, which is likely to hit revenue. Platforms like Alibaba’s Taobao, which relies on advertising revenue instead of transaction fees, are also expected to be hit by low ad spend as the economy slows,” according to S&P Global Market Intelligence.