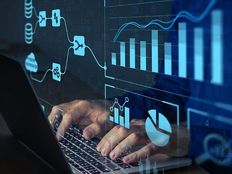 Thematic Times: Not Laboring Over News for Constituents

Thematic indexes are often synonymous with growth and many of these indexes like OGIGX, BCHAIN, and FUTURE which focus on internet giants, blockchain/crypto equities, and electric and autonomous vehicles, respectively, currently have large technology companies among their top constituents. During late 2020 and 2021, many of these technology-oriented companies were able to excel and expand their operations, including hiring aggressively. But now the U.S. equity market (as measured by the S&P 500) is down 19.7% YTD, inflation is still high, and the Fed has raised interest rates for the sixth time on November 2. Companies that were growing significantly are now implementing cost-cutting measures—and perhaps the most visible change to investors has been large scale layoffs and hiring freezes. While layoffs are often indicative of a weakening economy, it is important to look at individual company layoffs in perspective of broader employment trends and also realize that layoffs (along with more in-depth strategic restructuring) could actually be a positive catalyst for a struggling company.

As shown in the chart above, several large technology companies have announced either layoffs or hiring freezes over the past couple of weeks. Twitter announced it was laying off half of its workforce (around 3,700 employees—although reportedly some employees have asked to return). Meta Platforms (META) has also announced it would lay off 11,000 employees (13% of its workforce) in its first major workforce reduction in the company’s history. But these high-profile layoffs so far do not seem to be indicative of the broader economy or even the technology sector. It is difficult to translate individual company layoffs to the broader employment market for several reasons. First of all, economic data is typically reported with a lag—for example—the Bureau of Labor Statistics reported its preliminary Job Openings and Labor Turnover Survey (JOLTS) figures for September on November 1. Assuming the layoffs announced over the past couple of weeks happen relatively quickly, these may not be reflected in economic data until early 2023.

Second, layoffs of a few thousand people may be a significant portion of a company’s headcount, but it is still an extremely small portion of the 154 million people employed in non-farm jobs (as of October 2022). For example, Snapchat (SNAP) announced it was laying off around 1,300 employees (approximately 20% of its workforce) on August 31, 2022—one of many companies including Netflix (NFLX) and Spotify (SPOT), which also made headlines for layoffs this past summer and fall. As of its 3Q22 earnings report (for the quarter ending September 30), SNAP’s headcount was down 740 from the previous quarter, which is still slightly higher than its 3Q21 headcount one year ago. Like many tech companies which hired aggressively over the past couple of years, a 20% workforce reduction would still be around double the headcount pre-pandemic. Looking at the broader dataset from that time period—according to the most recent JOLTS report, overall layoffs in the United States were not necessarily higher over these past few months despite layoff headlines starting several months ago. The reported layoff rate was only 0.9% of total employment in September, which was the same rate seen in May through July (the August layoff rate was actually slightly higher at 1.0%). See this report for more detailed analysis on employment and JOLTS data.

Layoffs and hiring freezes may be part of a bigger strategic plan to turn around an underperforming company.

It is also important to note that while layoffs are unfortunate for the affected employees and can be detrimental for company morale, they are not necessarily an indicator of poor forward performance on a company level. Layoffs often occur when companies are already performing poorly and looking to decrease expenses in order to raise profits and free up cash. But layoffs on their own will rarely raise profits. Companies must also make strategic changes in order to increase labor productivity efficiencies—including investing in technology, changing strategic goals, and adjusting client and supplier relationships. Otherwise, a reduction in headcount could reduce revenue in addition to costs. In the case of many of these technology companies, which are down over 20%-70% YTD, strategic restructuring (including layoffs and hiring freezes) could be seen as a positive catalyst for investors who are looking for the company to make tangible changes. It usually takes several quarters, however, for efficiencies to be fully realized, so any long-term benefits to individual company performance from layoffs and hiring freezes may also not be seen until 2023.

Despite several high-profile tech layoffs, the labor market is still relatively strong, and overall layoff rates have so far been historically low. For many of the technology companies found within thematic indexes, layoffs and hiring freezes could possibly be seen as a positive catalyst to turn around companies that have been performing far below the broader equity market on a YTD basis.

Related Research:
Thematic Times: SPACs Within the Thematic Space
Travel Gets Back to Business
Netflix Proves Streaming Companies are Still Worth Watching
Legacy Automakers Charge Ahead of New Entrants in EV Push