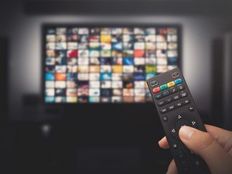 With better access to internet and more connected devices, people are changing the way they consume their media. For years (including pre-pandemic) this trend has been visible in consumer spending data by the Bureau of Economic Analysis. In 2022, consumers spent 16.5% more than last year on video streaming and rentals, which has recently been able to take more share from traditional movie theaters. Out of television time, streaming has also been growing its share—the latest data from Nielsen in November 2022 put streaming as 38.2% of total television usage compared to 28.5% in November 2021.

While these underlying trends support the long-term investment thesis, media companies are still figuring out how exactly to monetize and transition businesses to streaming. Looking within the S-Network Streaming & Gaming Index, media companies like Walt Disney Company (DIS, 3.8% index weight) and Warner Bros. Discover (WBD, 3.6% index weight) are investing money in unique content and newer streaming areas like sports to stay competitive but are still trying to find a balance between higher spend and profitability. Netflix (NFLX, 5.3% index weight), which has been in the streaming business for years, is focusing on creating new content but also exploring ad-based options (something that other companies may be struggling with) to attract top-line growth (see here for more on Netflix). These are three topics in streaming we expect to hear more about as earnings season kicks off next week.

The overall advertising market has been weak and will likely feel some pressure throughout early 2023.

Broadly across industries, digital advertising has been weak as companies are reluctant to spend dollars during the current economic environment. High-profile internet companies like Snapchat (SNAP) and Meta Platforms (META) have recently suffered due to weaker ad revenues. In 3Q22, pro forma advertising revenue at WBD was down 11% y/y in the company’s network segment. WBD management stated at a recent investor conference that trends have been worse in 4Q22 in the U.S. ad market, with some minor green shoots emerging in 1Q23. Out of its streaming networks, however, advertising is actually only a small portion of revenues (4.6% in 3Q22). Currently, discovery+ has a $4.99/month ad-based plan (vs. $6.99/month for ad-free) and HBO Max has a $9.99/month ad-based plan (vs. $14.99/month for ad-free). NFLX, which historically did not have an ad-based business, just launched their ad-based tier for $6.99/month in late 2022 (vs. between $9.99/month to $19.99/month for ad-free). With NFLX reportedly selling advertising at around $65 per 1,000 impressions (higher than other streaming platforms), the company seems confident that it can be competitive in the ad-based space despite market pressure.

Streaming companies are investing a lot of money in content to stay competitive, but these costs aren’t always profitable. WBD has stated that the industry has gone “overboard…on a spending frenzy” and the company has been restructuring its content including culling less popular movies and television shows from its lineup. NFLX continues to invest in content but has not significantly raised its content spend in several years. In 2021 and 2022, the company invested around $17 billion in content spend, which should be around the same ballpark in 2023, according to management. Going forward, streaming companies are determined to keep spending money to produce unique and original programming but will likely be more selective to keep costs down, and we may see more shows and movies that are spinoffs, prequels, and sequels which may attract and retain viewership of programs with existing audiences.

Many streaming companies are diversifying into newer areas like sports or video games.

While sports have been slower to move into streaming, streaming networks are beginning to add live sports content to their streaming library. Disney offers sports through its ESPN+ network, while Paramount has access to a large sports selection through CBS. Amazon Prime has also added live NFL games to its catalog—these have contributed to increased audience engagement compared to games that aired solely on the NFL Network cable channel. Netflix, however, does not see as much profitability in sports since it demands higher prices and Netflix is attempting to shift to a more price-friendly for its consumers. Netflix had recently diversified into the video gaming market but so far it remains a small part of its offerings.

As 4Q earnings season approaches, streaming stocks will likely continue to shift focus away from top line growth and focus on managing costs. We expect them to mention some short-term struggle with the ad market in addition to new messaging about content spend and expanding offerings into other areas like live sports streaming. Netflix (NFLX) reports 4Q earnings on January 19. Disney (DIS) will report its FQ123 earnings on February 8. Warner Bros. Discovery (WBD) is estimated to report 4Q earnings in mid-February.

3) Live sports are headed to streaming services, and audiences are ready | Nielsen