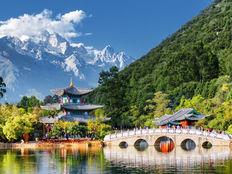 This China Consumer ETF Is Redeemed

As trade tensions escalated last month, the Global X MSCI China Consumer Discretionary ETF (CHIQ B-) pulled back, but the ETF is surging in September, up more than 11%, even as some investors fret about the strength of China’s domestic economy.

Still, CHIQ’s price action suggests that although the ETF’s components have a heavy domestic focus, the fund stands to benefit from the U.S. and China resolving trade issues.

“The outperformance of these Chinese stocks sends an important message at a time when popular sentiment suggests that China will suffer more if the trade war fails to resolve,” according to Barron’s. “The stock data is admittedly not extensive, but the outperformance is difficult to ignore. At minimum, the stocks seem to be immune to President Donald Trump’s tweets that the trade war is bad for China. So far, these stocks tell another story.”

CHIQ resides less than 5% below its 52-week high.

This article orignally appeared on ETFTrends.com.