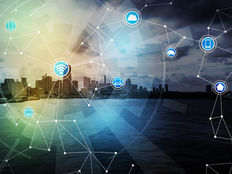 This Internet ETF Has Plenty of Momentum

A technology and e-commerce-focused fund, the Kevin O’Leary-sponsored Global Internet Giants ETF (OGIG), is up more than 29% year-to-date, making it one of the best-performing funds in its category. More importantly, OGIG has a slew of favorable fundamental tailwinds that can continue boosting the fund going forward.

According to O’Shares, OGIG is a “rules-based ETF designed to provide investors with the means to invest in some of the largest global companies that derive most of their revenue from the Internet and e-commerce sectors that exhibit quality and growth potential.”

Some of OGIG’s top portfolio holdings include companies such as Alibaba, Amazon, Facebook, and Alphabet, each of which represents 6- to 6.5-percent of the overall portfolio. Also amongst the index’s 52 holdings are Chinese tech companies like YY, Baidu, 58, and JD. For long-term investors, OGIG’s exposure to ex-US e-commerce and Internet companies is relevant and important.

That international exposure is a critical difference-maker when evaluating OGIG against domestic Internet ETFs and a trait that explains OGIG’s out-performance of legacy funds in the category.

“Asia and Africa on the other hand, have populations exceeding 4 billion and 1 billion, respectively, accounting for over 70%of the world’s population but have much lower adoption rates,” according to O’Shares.

Of course, China is a major player in a global e-commerce market, but many traditional Internet ETFs do not feature China exposure. OGIG does.

The digital advertising market in China is expected to undergo exponential growth over the next several years.