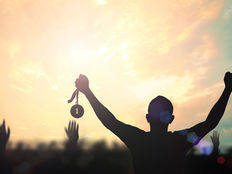 This Unique Sector ETF May be a 4th Quarter Winner

When it comes to examining sector ETFs that could be primed for some fourth-quarter upside, investors are likely to focus on basic funds, but there could be rewards with more unique approaches, such as the SPDR S&P Kensho Future Security ETF (FITE).

Although it’s overlooked, for now, FITE, which tracks the S&P Kensho Future Security Index, is higher by more than 30% this year, making it one of 2019’s better-performing thematic industry ETFs.

FITE’s underlying index “is designed to capture companies whose products and services are driving innovation behind future security, which includes the areas of cybersecurity, advanced border security, and the following areas for military application: robotics, drones and drone technologies, space technology, wearable technologies and virtual or augmented reality activities,” according to State Street.

FITE is a diverse play on the future of defense technology as the fund features exposure to 15 sub-industry groups.

According to a recent SailPoint survey of 400 IT leaders conducted during Cybersecurity Awareness Month, nearly two in three professionals indicated that they are extremely concerned about their personal identity being stolen. Half of the participants even admitted that they would participate in types of risky behavior that would increase the threat of leaked information and a potential breach.

“As businesses have become more dependent on the digital economy and the internet for their day-to-day operations and long-term growth, cyberattacks and data fraud or theft are now two of the top five risks CEOs are most likely to face,” according to State Street research. “Global spending on information security is projected to grow at a compound annual growth rate of 9.2% between 2018 and 2022, reaching $133.8 billion.”

Hacks, data breaches and other cyber-enabled crimes have increased in frequency, fueling the need to take steps to protect oneself when using the Internet, according to the FBI. As a result, the cybersecurity investment theme has also taken on increased prominence.

Related: Future of Energy Shapes up Well For This ETF

“The nature of warfare and border security threats has also evolved, driving the increase in government spending on militarized AI and unmanned and autonomous capabilities to protect national security. Worldwide spending on militarized artificial intelligence (AI) is projected to rise to $118 billion by 2023,” according to State Street.