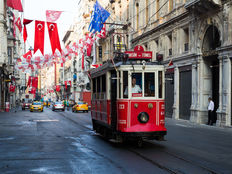 A Turkey country-specific ETF was among the top performers last week, as geopolitical risks across two of its neighboring countries begin to fade.

Turkey’s was particularly vulnerable to volatile moves associated with geopolitical risk in Middle East as the country is a neighbor of both Iraq and Iran, and it has close political ties to Tehran, especially as the two countries alongside Russia try to find a solution to the ongoing civil war in Syria. Consequently, Turkish markets were one of the first to suffer a severe blow following the U.S. airstrike that killed a key Iranian general.

However, Turkish stocks were also among the leaders when the geopolitical risks began to dissipate on Wednesday. In an address to the country on Wednesday, President Donald Trump signaled a de-escalation of tensions with Iran, Barron’s reports.

“Iran appears to be standing down,” Trump said, calling that a “very good thing for the world.” He also hinted that the U.S. was not seeking out a war.

Trump added that “the U.S. is ready to embrace peace with all who seek it.”

The U.S. revealed that damage from the missile attack on U.S. bases was limited, which could suggest the retaliation was crafted to satisfy Iranian public demand for a military response while avoiding a potential American counterattack. “All is well!” Trump tweeted after the attack Tuesday night.