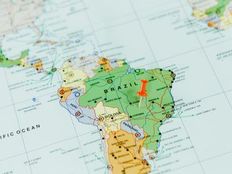 Lula’s victory margin sits just under 2% with 100% reporting, the tightest margin since the 1988 ratification of its new seventh constitution, as concerns abound that Bolsonaro and his supporters may hinder the peaceful transition of power. Barring election-related instability, Lula will face a legislative branch in Brasilia dominated by Bolsonaro’s right-wing allies amid ongoing budget woes.

In Lula’s prior tenure as president, the nation saw millions lifted out of acute poverty into the middle class, with the president-elect set to focus on expanded support for social programs like housing and debt forgiveness as well as government spending to drive growth. The new president has also committed to protecting the Amazon, not only for environmental reasons but also to protect indigenous lands. Deforestation jumped by 72% under Bolsonaro.

The latter may factor heavily into the future of the country’s economy. Agriculture and mining are key exporters. Investors should also watch for China’s hunger for commodities, with its status as the world’s largest commodity consumer important for Brazil’s prospects – soybeans, iron ore, oil, beef, and cellulose totaled 89.5% of Brazil’s exports to China in 2021.

China has become a source of ire within Brazil, not only from the right for its supposed communist ideology but also across the political spectrum due to the impact the two nations’ trade relationship has had on Brazil’s domestic economy. The extent to which Lula chooses to suppress or embrace protectionist policies designed to stymie deindustrialization within Brazil will be key.

FLBR has seen $108 million in one-year net inflows and returns of 12.4% over the last three months, compared to 7.6% for the ETF Database Category Average. Investors looking for low-fee exposure to a key part of global markets may want to consider the possibilities for economic renewal in Brazil ETFs like FLBR.

VettaFi is an independent publisher and takes responsibility for our edit staff, research and postings. Franklin Templeton is not affiliated with VettaFi and was not involved in drafting this article. The opinions and forecasts expressed are solely those of VettaFi and may not actually come to pass. Information on this site should not be used or construed as an offer to sell, a solicitation of an offer to buy, or a recommendation for any product.