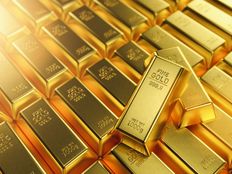 Some new exchange traded funds don’t enjoy the benefit of good timing, but others do. It appears as though the Franklin Responsibly Sourced Gold ETF (FGLD ) is in the latter category.

FGLD, which debuted in June, arrived on the scene at a time when gold – though not setting the world on fire – is outperforming other assets. In fact, the yellow metal is topping broader market equity and aggregate fixed income strategies this year.

That’s occurring even with the challenges set forth by rising interest rates, which is a boon for the U.S. dollar. Gold, like other commodities, is denominated in dollars. Historically, the stronger the greenback is, the more vulnerable bullion becomes. Some experts argue the dollar could be poised to weaken into year-end, potentially setting the stage for a gold rally. Signs of that are already emerging.

Adding to the allure of FGLD is that global central banks are extending what’s long been a substantial appetite for gold. That makes sense at a time of withering bond prices, high inflation in both developed and emerging markets, and volatile currency movements.

“Central banks, meanwhile, have continued their purchases of gold. That is consistent with the trend following the 2008 financial crisis, says Steve Land, lead portfolio manager of the Franklin Gold and Precious Metals Fund according to Barron’s. “Global central banks added 180 metric tons to official gold reserves in the second quarter from the first quarter, according to the World Gold Council.”

Another point in FGLD’s favor is that, as its name implies, the fund focuses on responsibly sourced gold. That lends an element of environmental, social, and governance (ESG) credibility to the rookie fund and that’s a rarity in the gold ETF category.

FGLD stands out for another reason. Its annual expense ratio is a mere 0.15%, or $15 on a $10,000 investment, making it one of the most attractively priced ETFs in its peer group.