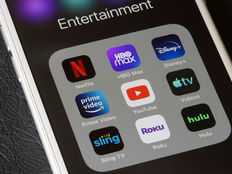 A Streaming Sensation: This ETF Goes Beyond Netflix

Netflix (NASDAQ: NFLX) is still the dominant force amongst streaming equities, but as the Roundhill Streaming Services & Technology ETF (SUBZ) proves, this an expanding universe with more opportunities than many investors may realize.

In fact, the actively managed SUBZ, which debuted in February, could be an ideal way for investors to access the fast-growing streaming entertainment arena while reducing dependence on Netflix. That could be an advisable strategy because, as some analysts point out, streaming is an increasingly competitive industry and Netflix is already richly valued.

“We still believe Netflix is substantially overvalued. The firm has performed exceptionally well in recent years in terms of subscriber growth, but we see increasing hurdles to that growth. Competition for streaming audiences is increasingly intense as Amazon, Disney, WarnerMedia/Discovery, and even ViacomCBS,” according to Morningstar research.

Netflix is often viewed as the original streaming company. While it’s still the leader, it faces credible competition from others, namely Disney’s (NYSE: DIS) Disney+. Likewise, Amazon’s (NASDAQ: AMZN) recent acquisition of MGM shows its commitment to boosting its streaming offerings. Those three stocks combine for over 10% of the SUBZ roster, according to issuer data.

In addition to Disney, traditional media firms found among SUBZ components include ViacomCBS (NASDAQ: VIAC). That company has a deep content library, is positioned to benefit as more Americans return to movie theaters, relaunched its Paramount+ streaming offering a few months ago, and is displaying a willingness to invest in new content. Morningstar said the CBS parent is its favorite media stock. The name represents over 3% of the SUBZ lineup.

ViacomCBS has other favorable attributes, including its often overlooked though still fast-growing Pluto streaming service. Discovery (NASDAQ: DISCA), 2.77% of SUBZ, is another streaming name Morningstar likes.

“The launch of Discovery+ earlier this year leaves the firm a bit late to the streaming game, but it now has an outlet for fans who don’t want traditional television service. The plan to join forces with WarnerMedia should provide opportunities to accelerate streaming adoption as the new firm crafts bundled offerings,” according to the research firm.