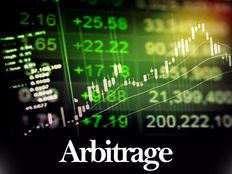 A Merger Arbitrage Playbook For You

Investing in merger arbitrage has many potential advantages, including low correlation and low beta to the stock or bond markets, as well as low volatility compared to equity markets, as reflected by standard deviation.

As interest rates have begun to increase to combat inflation, with most of the Fed officials projecting pushing it up to at least pre-pandemic levels, consistent with raising interest rates at every scheduled meeting this year, investors are flocking toward investments poised to succeed in the current environment.

The Federal Reserve said earlier this month that it would raise interest rates by a quarter percentage point to a range between 0.25% and 0.5% from near zero, in addition to penciling in further rate increases this year to combat inflation, which has continued to swell and has reached four-decade highs.

Investors looking for investments that are well-positioned for inflationary and higher interest rate environments should consider adding a merger arbitrage strategy to their portfolios.

Especially relative to the current environment, merger arbitrage has tended to be positively correlated with interest rates; if interest rates rise, the strategy’s performance may provide a hedge against the decreased value of bonds, according to Virtus.

A merger arbitrage strategy, such as the Merger Fund (MERFX), is an “absolute return” strategy characterized by investments in companies involved in pending mergers, takeovers, and other corporate reorganizations, with the goal of profiting from the timely completion of these transactions.

Investments trade on idiosyncratic deal dynamics and tend to have a low correlation with other situations within a portfolio; the outcome of a single transaction will likely not impact the outcome of other portfolio investments. Investment returns are driven primarily by the outcome of the specific transactions rather than the direction of equity or bond markets.