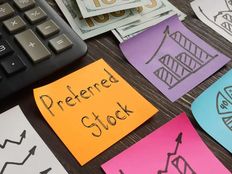 After Declines, Preferred ETFs Are Worth Exploring

Preferred stocks are hybrid securities, meaning they display traits of bonds and equities. This year, that’s not a positive, as both fixed income assets and stocks are faltering.

Regarding preferreds’ bond-like traits, rising interest rates are an obvious problem, and with speculation rising that the Federal Reserve could boost borrowing costs by as much as 75 basis points at its next meeting to damp inflation, it’s understandable that many investors aren’t rushing to bonds.

However, there could be a silver lining for preferred stock exchange traded funds, such as the Virtus InfraCap U.S. Preferred Stock ETF (PFFA). For patient income investors, PFFA could be worth considering because the ICE BofA Fixed Rate Preferred Securities Index indicates that there’s some value to be had in preferred stocks.

“Over the last 20 years, the average price of the index has rarely been lower than where it is today (March). There are two clear outliers: the 2008-2009 financial crisis and the pandemic-induced plunge in March 2020,” wrote Collin Martin of Charles Schwab.

While there’s no getting around the fact that preferred stocks and the related ETFs are struggling this year, PFFA offers some benefits for income investors who are considering wading back into the asset class. For starters, PFFA is actively managed. Preferreds are an asset class where active can work, and PFFA is proving as much this year, as it’s beating the largest ETF in the category by more than 400 basis points.

Additionally, by not being constrained by an index, PFFA’s managers can better manage interest rate risk while finding value opportunities in the preferred space, which some experts think are abundant right now. The latter point has obvious advantages.

“Historically, a lower starting price translates to a higher total return over the next 12 months,” added Schwab’s Martin. “The average returns are just that—averages—and they can still fluctuate, sometimes wildly, given the riskier nature of preferred securities. Focusing on the average starting price between $95 and $100, the average forward 52-week total return was close to 9%, but the worst return in that starting range was a 58% loss during the financial crisis.”

There’s another benefit to PFFA being actively managed. The fund yields 376 basis points more than the largest preferred ETF because PFFA deploys “modest” leverage “to enhance portfolio beta, and options strategies are used in an effort to enhance current income,” according to Virtus.