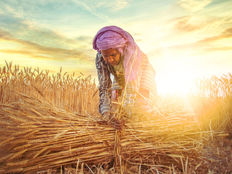 Wheat prices spiked to around 6% on Monday after India announced a ban on wheat exports.

Valdis Dombrovskis, the EU’s trade chief, told CNBC that the U.S. and European Union are looking at how to improve food supply chains with export restrictions from India and other nations. G-7 foreign ministers warned that the war in Ukraine is raising the risk of a global hunger crisis.

“That’s something which is very much of concern,” said Dombrovskis. “We agreed with the United States to cooperate and coordinate our approaches in this area, because … as a response to Russia’s aggression against Ukraine and a corresponding increase in food prices and concerns about food security, countries are starting to take export restrictive measures. And we think that this is a tendency which can only actually aggravate the problem.”

Limits on exports are likely to drive up commodity prices and in turn food costs.

India joins several countries to place a ban on such exports, including Russia and Ukraine, Egypt, Kazakhstan, Kosovo, and Serbia.

Also in April, the Peterson Institute for International Economics wrote in a note that the war in Ukraine has “taken a shocking toll on the region,” before adding: “It has also contributed to a global food crisis, as Russia is blocking vital fertilizer exports needed by farmers elsewhere, and Ukraine’s role as the breadbasket for Africa and the Middle East has been destroyed.”

The Indian government said it would still allow exports for letters of credit that have already been issued and on the request from countries that are trying “to meet their food security needs.”

Russia and Ukraine are among the biggest exporters of global wheat, accounting for 29% of exports, the World Bank is reporting.

It may not invest in all the benchmark components, but it will hold similar interests to those included in the index, along with short-term investment-grade fixed income securities, money market instruments, specific bank instruments, and cash or other cash alternatives. The underlying Bloomberg Commodities Index tracks the price of rolling positions in a basket of commodity futures with a maturity between one and three months.

The abrdn Bloomberg All Commodity Longer Dated Strategy K-1 Free ETF (BCD), meanwhile, tries to provide long-term capital appreciation that exceeds the performance of the Bloomberg All Commodity Index 3 Month Forward Index, which tracks movements in the price of rolling positions in a basket of commodity futures with a longer maturity of between four and six months.

Both funds are actively managed.