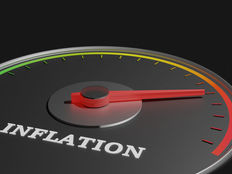 Among the best-performing non-leveraged ETFs of Thursday, the iPath Series B S&P 500 VIX Short Term Futures ETN (VXX A-) increased 8.6%, and the ProShares VIX Short-Term Futures ETF (VIXY A) advanced 8.4%. Meanwhile, the CBOE Volatility Index climbed 19.4% to 23.8, breaking back above its short-term resistance at the 50-day simple moving average.

The updated inflation data threw a wrench into a somewhat stabilizing market. Money managers warned that they are bracing for more volatility ahead as the market waits for the Fed to react to wrangle the high inflation.

“I expect that we’ll see a return of the volatility that was prevalent for most of the month of January in the wake of this report,” Brian Price, head of investment management for Commonwealth Financial Network, told Reuters.

“Investors may want to buckle up as it could be a rough ride for risk assets until inflationary data starts to abate, and I expect that it will, as we move through the year.”

Traders are betting the Fed will hike interest rates at its March meeting, with money markets indicating a 50% chance of a half-point rise next month, compared to bets of a 30% chance before the release of the inflation data.

“Speculation regarding the outcome of the next [Fed meeting] will now run rife,” Sandra Holdsworth, head of rates UK at Aegon Asset Management, told the WSJ. “With inflation at these levels and still not expected to have peaked, it’s hard to argue whether 25 basis points, 50 basis points, or even more is the right response from the central bank.”