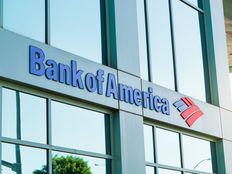 CEO Says Bank of America is a Technology Company

At the Yahoo Finance’s All Markets Summit on Monday, Bank of American CEO Brian Moynihan said that he views the business not just as a banking entity, but also a financial technology company that is working to stay on the forward edge of innovation, reported Yahoo Finance.

With the growth of digital banking, digital payments have become a core part of the bank’s business and make up a large portion of their total transactions; through October, there have been $2.8 trillion in transactions, and roughly half of those have been done digitally.

In the earnings statements released last week for the third quarter, Bank of America reported 40.9 million active digital banking users, a full 32 million of which were accessing services from mobile devices.

“We’re clearly a technology company,” Moynihan said at the summit. “We spend about $3.5 billion a year on new code implementation. New products and services are driven by technology.”

Bank of America has beefed up its digital offerings in recent years with the incorporation of Zelle, a peer-to-peer payment network that saw a 48% growth in transactions over last year, and the introduction of Erica, a voice-activated virtual assistant that assists in “hundreds of millions” of transactions each quarter, according to Moynihan.

“Over the last few years, we’ve been able to digitally enable the mortgage transaction end-to-end, and the opening of a checking account end-to-end, and all these things," Moynihan said. “We have Merrill Edge… it’s effectively a $300 billion-plus, growing rapidly, company that is in the online trading business, self-directed trading business for customers.”

Bank of America is seeing the returns on investments it put into being at the cutting edge of digital innovation; before reinvested dividends, stocks have gone up 80% in the last three years.

Putnam Invests in Bank of America

Bank of America has positioned itself to continue growth going forward by remaining innovative and transitioning to include digital options in an increasingly digital world. Putnam invests in Bank of America and other value-based companies that exhibit the potential for growth.

The Putnam Focused Large Cap Value ETF (PVAL B+) is an actively managed fund that seeks to invest in U.S. value companies that have the potential for capital growth, current income, or both.

PVAL invests primarily in large-cap companies that are similar size to the Russell 1000 Value Index, but it may also invest in mid-cap companies. As the investment manager, Putnam determines if a company is considered a value stock by looking at its valuation, financial strength, growth potential, competitive position in its industry, projected future earnings, cash flows, and dividends.

The fund is semi-transparent in that it does not publish daily holdings on its website, but instead it publishes a tracking basket that is representative of the daily performance of the fund.

The fund carries an expense ratio of 0.55% and had 44 holdings as of the end of September.