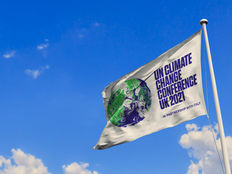 The State of U.S. Policy Going Into U.N. Climate Summit

The global climate summit meets every five years and was enacted after the 2015 Paris Agreement, an agreement that includes every country worldwide with the exception of Turkey, Iraq, and Iran, according to CBS.

The goal of this year’s summit is to ensure that the countries are working to meet their goals of reducing greenhouse gas emissions, moving away from coal, and creating a worldwide carbon market. With the U.S.’s withdrawal from the Paris Agreement by former president Trump and the rejoining by President Biden, the United States is expected to be under a lot of scrutiny, particularly as it is the largest producer of fossil fuels and one of the largest greenhouse gas producers globally.

President Biden is working to pass climate legislation through Congress and announced earlier today a reworked $1.5 trillion version of the climate and social spending bill, reported CNBC. Democratic holdouts in the Senate are wanting the companion social spending bill to be ironed out first, particularly as a federal paid family leave and medical leave system creation was one of the cuts made by the Biden administration to the reworked bill.

“It is obvious that the position of the United States and its capacity to negotiate will be much bigger if all the commitments that are foreseen can be demonstrated as commitments that will be implemented,” United Nations Secretary-General António Guterres said in a press conference.

Current policies worldwide by countries have us on track for a 2.9 degree Celsius increase, better than the 3.7 degree increase before the Paris Agreement but still well above the 2 degree goal of the original agreement, and well within the threshold of catastrophic weather patterns and effects to global economies.

The original agreement was that every five years countries would set voluntary goals that work to increasingly reduce emissions and reach net-zero carbon emissions by 2050. Thus far, the U.S. pledged to cut emissions in half by 2030 back in April, but major global emitters such as China, Brazil, and India haven’t yet announced their updated targets.

Putnam Invests in Sustainability for Today and Tomorrow

Putnam believes in sustainability and holds ESG practices as a core aspect of its investment approach. Its ESG-focused active sustainability managers are a fundamental part of its work to align shareholder ESG values with investment practices by engaging directly with the companies invested in as to their ESG fundamentals and practices.

The Putnam Sustainable Leaders ETF (PLDR C+) invests in companies whose focus on ESG issues goes well beyond just basic compliance and for whom ESG is an integral part of their long-term success. These companies have transparent goals and provide consistent, measurable progress updates.

PLDR has an expense ratio of 0.59% and had 61 holdings as of the end of September.

Meanwhile, the Putnam Sustainable Future ETF (PFUT C) invests in companies seeking to provide solutions to future sustainability challenges. It is a forward-looking approach, as these companies are helping to develop ESG and solve problems related to sustainability.

PFUT focuses on impact companies as identified by its sustainability rating system and on investing in companies driving economic development, as Putnam believes that strong sustainability practices equate to strong financial growth.

PFUT’s top sector allocations as of the end of September were 34.26% in healthcare stocks, 28.23% in information technology, and 9.45% to consumer discretionary.

The ETF has an expense ratio of 0.64% and had 72 holdings as of the end of September.