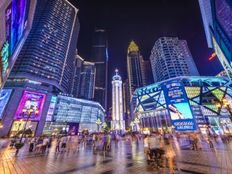 It’s been another challenging week for China in the news, with reports of home buyers boycotting mortgage payments in Mainland China and rumors of a data breach at Alibaba collectively sending stocks falling in both Mainland and Hong Kong markets. Buried underneath the sentiment was the release of a surprisingly strong retail spending report for June that gives credence to the effects that favorable monetary policies in China are having for consumers.

The real estate issues are part of the much larger, glacially slow process of working through the failure of Evergrande defaulting at the end of last year. The company was the largest real estate giant in China at the time, with properties and projects across all of China’s sectors. A large portion of Evergrande’s projects were apartment homes that were purchased but have been sitting unbuilt with no headway for at least half a year.

“Who can blame the apartment buyers for not paying for a good that has yet to be delivered? I anticipate zero sympathy from the government on this issue. However, I do not believe this will be a significant problem though it has weighed on real estate and bank stocks in addition to overall sentiment on the Mainland,” wrote Brendan Ahern, CIO of KraneShares, on the China Last Night blog.

Hong Kong stocks were down on a Wall Street Journal article that reported that executives at Alibaba had been called in by police in Shanghai over a theft of Shanghai police data that happened in June through using Alibaba’s cloud services. Ahern pointed out that the story remains uncorroborated by Alibaba or any other sources, but investors responded aggressively to the article, short-selling many internet stocks in Hong Kong.

In the middle of all of the sell-offs and struggles, the June consumer spending report was released for China, and it was big. Retail sales were expected to grow 0.3% in June; instead they were up 3.1%, with online retail sales of physical goods up 5.6% year-over-year.

Online retail sales now make up 25.9% of all retail sales of consumer goods in China. It’s an indicator that China’s easing monetary policy is making a difference for consumers while the broader economy continues navigating COVID-19 outbreaks and lockdowns.

The KraneShares CICC China Consumer Leaders Index ETF (KBUY B-) benefits in an environment of increased liquidity due to the resultant increase in consumer spending. With the Chinese government currently engaged in monetary easing and June’s higher retail sales, consumer spending and travel could be set to continue increasing over time.

KBUY tracks the CICC China Consumer Leaders Index, which invests in the publicly traded, China-based companies that make up the consumer industries in the country. These include apparel and clothing, hotels, restaurants, home appliances, food and beverage, and duty-free goods.

KBUY’s index selects the top 30 companies ranked by their long-term operating income and cash flow, market cap, long-term return on equity, and long-term gross profit. These companies are included in the index and weighted by free-float market cap, with no singular company representing more than 15% of the underlying index.