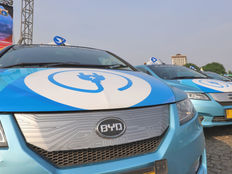 Despite all of the regulatory news and market uncertainty in China, the electric vehicle market in China continues to stride forward. BYD Co Ltd, an automobile and electronics manufacturer that is a major producer of electric vehicles (EVs), closed trading up 10% for the day, reflecting a market cap of $124 billion USD, reports KraneShares.

The EV market is intensely competitive in China, so much so that BYD’s CEO Wang Chuanfu, told the CEO of Xiaomi “don’t waste your time and money,” in response to the company considering EV manufacturing in China, reports Verdict.

A wide range of firms, such as smartphone brands Oppo and Vivo as well as search engine giant Biadu, are looking to get into the electric vehicle market.

Verdict explores a GlobalData report that called China a “spellbinding” force in the thematic area of what China terms New Energy Vehicles (NEV).

“China has aimed to make NEVs account for 25% of its auto sales by 2025,” said GlobalData in its report. “The country accounts for nearly 38% of global EV sales, as of 2020, reflecting China’s position as the most populous country and the one with highest demand for transportation.”

Lithium ion is the most established battery technology that exists currently for electric vehicles, but with recent breakthroughs by companies such as BYD, the constant innovation and cost reductions continue to make these vehicles appealing to the masses.

“BYD’s success in BEVs (battery electric vehicle) is in large part due to its vertical integration and dominance of the lithium-iron phosphate (LFP) battery market,” said GlobalData analyst Michael Orme. “These batteries, unlike Li-ion batteries, are safe, cost less and BYD’s latest Blade batteries have closed the performance gap with lithium-ion.”

The Future of Transportation

The KraneShares Electric Vehicles and Future Mobility ETF (KARS) invests in BYD and many of the leaders in the electric vehicle industry in China.

The index has strict qualification criteria: companies must be part of the Bloomberg World Equity Aggregate Index, have a minimum free float market cap of $500 million, and have a 90-day average daily traded value of $5 million.